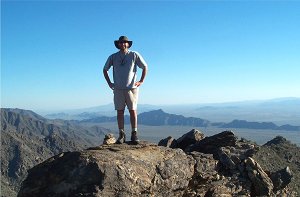 Chair of the AP Academy B.S. in Zoology from the University of Washington M.S. in Ecology, Evolution, and Behavioral Biology from Michigan State University

I grew up in Tacoma, WA and attended the University of Washington, where I received a Bachelor's degree in Zoology. I received my Master's degree in Zoology with a specialization in Ecology, Evolution, and Behavioral Biology at Michigan State University, with my Master's Thesis research focusing on habitat use by bats in the managed forests of the Cascade Mountains. It was while teaching Environmental Physiology at Michigan State University as a graduate assistant where I fell in love with teaching and knew that would probably be my future.
I worked as a Biological Technician at Hawaii Volcanoes National Park working on endangered species management for two years before moving back to Washington. After teaching Environmental Science at Whatcom Community College in Bellingham, I was convinced that I would focus my career on education. I worked as an Interpretive Ranger at Olympic National Park and then got my first teaching job in Page, AZ teaching Earth Science. Why Page? Simply to see a new part of the country...
My wife and I later moved to Tuscany in Italy to teach for the Department of Defense schools, where I taught every science from 7th-12th grade, plus Algebra I and II. We lived in Italy and traveled all around Europe for four years. But, after our daughter was born in Italy, we decided to move back to the states, where we bought an RV and traveled North America for 2 years before finally deciding to park the trailer in beautiful Northern Arizona and look for jobs. And here I am... This is my seventh year at Flagstaff High School.
* 2015 Arizona Education Foundation's "Ambassador for Excellence"
* 2014 Coconino County Teacher of the Year
* 2017 and 2014  Teacher Awards for Sustainable Curriculum: Sustainable Economic Development Initiative (SEDI) of Northern Arizona
You can add a copyright statement or legal disclaimer in this area if necessary

You can add a copyright statement or legal disclaimer in this area if necessary
Copyright © 2002-2021 Blackboard, Inc. All rights reserved.