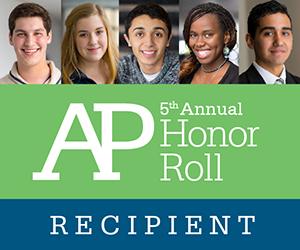 Flagstaff Unified School District (FUSD) is one of 547 school districts in the U.S. and Canada (3 in the State of Arizona) being honored by the College Board with placement on the 5th Annual AP District Honor roll for increasing access to AP course work while simultaneously maintaining or increasing the percentage of students earning scores of 3 or higher on AP Exams. Reaching these goals indicates the district is successfully identifying motivated, academically prepared students who are ready for the opportunity of AP. Since 2012 FUSD has increased the number of students participating in AP while improving the number of students earning AP Exam scores of 3 or higher. FUSD is committed to expanding the availability of AP courses among prepared and motivated students of all backgrounds.

“The devoted teachers and administrators in this district are delivering an undeniable benefit to their students: opportunity. When coupled with a student’s hard work, such opportunities can have myriad outcomes, whether building confidence, learning to craft effective arguments, earning credit for college, or persisting to graduate from college on time.” Said Trevor Packer, the College Board’s Senior Vice President of AP and Instruction. “We applaud your conviction that a more diverse population of students is ready for the sort of rigor that will prepare them for success in college.”
Inclusion on the 5th Annual AP district Honor roll is based on the examination of three years of AP data from 2012 to 2014, looking across 34 AP Exams, including world language and culture.

The following criteria were used.
Districts must:
· Increase participation/access to AP by at least 4 percent in large districts, at least 6 percent in medium districts, and at least 11 percent in small districts;
· Increase or maintain the percentage of exams taken by African American, Hispanic/Latino, and American Indian/Alaska Native students; and
· Improve performance levels when comparing the percentage of students in 2014 scoring a 3 or higher to those in 2012, unless the district has already attained a performance level at which more than 70 percent of its AP students are scoring a 3 or higher.

You can add a copyright statement or legal disclaimer in this area if necessary
Copyright © 2002-2020 Blackboard, Inc. All rights reserved.